Gedit is Notepad for Ubuntu Linux. It is a text editor which is not similar to the Microsoft Window’s Notepad. It is the official text editor of Gnome desktop environment and Ubuntu Breezy Badger. It has many great features that Notepad lacks:

There is no doubt that Ubuntu developers made the perfect decision by making Gedit the default text editor in Ubuntu.

I used Gedit for a while but then I switched to Leafpad which is another text editor similar to Notepad. Unlike Gedit, Leafpad is fast on old computers. Since I don’t work with many text files at once and I don’t work much with HTML, PHP, CSS, etc. So syntax highlighting is not necessary for me.

As far as spell check is concerned, I use Blogger’s spell check interface for that. My needs gave Leafpad an edge over the perfect choice that is Gedit and I switched. This is what I am loving about Linux, you can modify things to meet your needs. 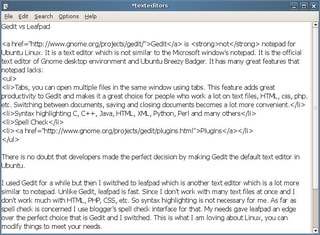