I have previously used XFCE with Xubuntu. But then I replaced it with Debian Etch and Gnome. But Gnome was becoming a little too heavy for me. I was bored and needed some change. So I decided to install a complete Gnome free system. First I downloaded latest Debian net-install cd. Installing Debian this way is much more easier. You get a chance to select your own packages during the installation or go ahead with some preselected packages. You even have a choice to install only the minimal system. So I installed the minimal base system and then logged in.

I am using Linux for more than a year now so I am comfortable with commands. Since I was going to install new things so it was wise to log in with super user priviledges.

Once logged in, I had to tell apt to use network proxy. I did that by running the command:

This command is temporary solution and you will have to repeat it with each new session. There is a workaround to set this up permenantly.

I installed XFCE4 by running the command:

I was foolish, I thought I would be able to log in a nice GUI world by simply downloading XFCE4. I forgot that I should also download gdm and xorg.

Even then I was unable to log in to the gdm. So I ran:

This command runs a nice little wizard which helps you solve issues with your xserver settings. It could be difficult sometimes if you don’t know what hardware you are using and what it is called. Like once I had this trouble and I had no other computer to connect to the internet and ask for help on the internet. At that time I learnt about lynx a text mode web browser and bitchx the IRC chat client.

After configuring xserver I logged in with GDM and entered into the brand new world of XFCE. May be its just me but XFCE in Debian is faster and prettier than Xubuntu. I still had to install iceweasel web browser, xchat, ttf-nafees font and gimp. Working in this new environment, limited set of tools and applications, I learnt that I need to download more packages. Like for example I didn’t install alsa-base package. I also didn’t have xfce4-mixer package which is required to add a volume indicator icon on panel. I also learnt that I can’t live without Synaptic package manager. 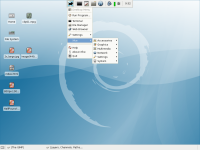 I am much happier now and satisfied for a few months at least. Basic applications are still the same. I was already using Mousepad, Iceweasel, Gimp and Xchat with Gnome. But the most notable difference is in performance. My computer is much faster now, start up time is improved and it feels so neat.